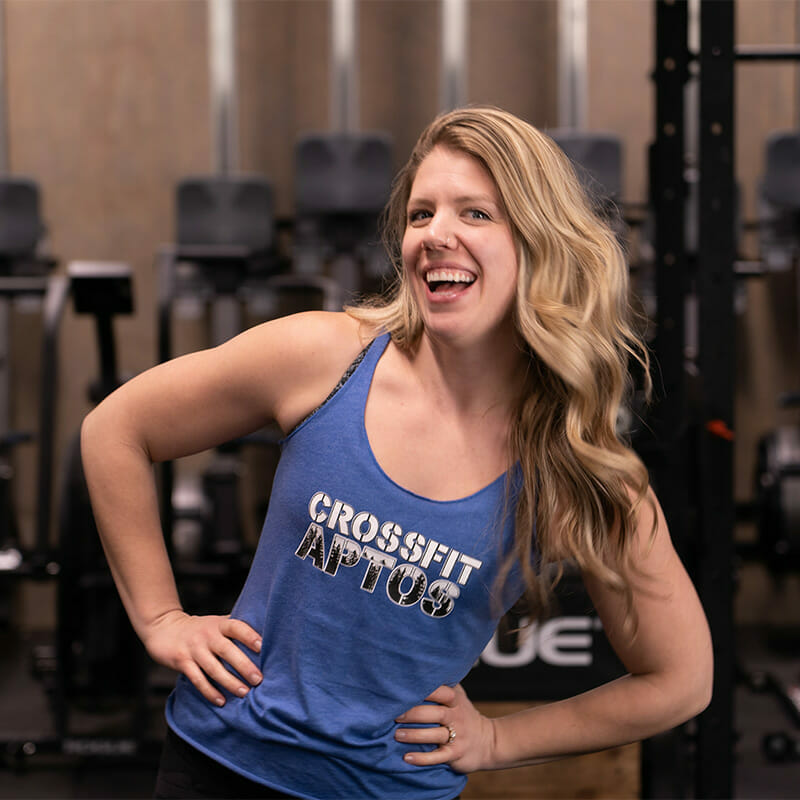 I’m Sam Gray, and for years I struggled to find a fitness routine that I loved. I’ve struggled with feelings of inadequacy and not feeling “ready” to begin something new. I’ve been unhappy with what I saw in the mirror, avoided the scale and told myself I would start “tomorrow” too many times to count. While in college, I lived a fairly active lifestyle going on hikes, playing in the intramural volleyball league on campus, and going snowboarding, but never specifically trained for anything. After a hard breakup, I took up long-distance running to help cope with overwhelming emotions. It was then that my love for running and fitness developed. I then found CrossFit unexpectedly and immediately loved it. I loved connecting with the community and immediately felt welcome. It soon became clear that my passion was to help others experience their capabilities. I love being a CrossFit coach because it allows me to help others see their true potential even when they can’t see it themselves. I love sharing the excitement of seeing our members reach their goals and living their best life!

Kony found CrossFit when she moved from her homeland in Greece to Aptos after marrying an amazing guy and following him to the other side of the world. Since a very young age, she’s had a talent in almost any sport she played. She started with gymnastics and spent most of her school year on a basketball court and helping her school and college win four consecutive championships. She then started playing on the women’s pro league basketball division in Greece, but stopped so she could focus on her studies in Industrial Design, Computer Administration and Film Production, eventually earning her BA. After working some years in creative departments in the advertising industry, she always felt as if something was missing in her life and felt compelled to help others in need which took her to Denmark. She volunteered in a drug-rehabilitation center. She soon took an executive post and stayed for seven years. In 2009, she moved back to Greece and started working in an alternative/holistic clinic close with doctors who treated patients through exercise and nutrition only. In 2010, after getting married and having an awesome son, they decided to move back to where she first met her husband on a business trip to start a new adventure, find CrossFit, get her Level 1 Certificate and start coaching. While in Greece, she attended Olympic Weightlifting and gymnastics classes with the coach of the National Greek Gymnastics team.

Jason lives in Aptos with his wife and three kids, two active boys and an adorable little girl. He has always lived an active lifestyle competing in pole vaulting in high school and playing football as an adult. He was a gym rat who looked up to his older brother who competed as a bodybuilder in Canada. He began to get disinterested in the gym life and looked for other ways to remain fit. He began running and spent a lot of time exploring Nisene Marks State Park and running 5 k’s, 10 k’s, half marathons and full marathons. His older brother soon told him about this crazy workout program that he was doing called CrossFit. Jason saw the transformation it made in his brother and son, and he decided to give it a try. From that point forward Jason was hooked. He loves being able to share what CrossFit has done for him and hopefully inspire others. He feels that getting to be part of a person’s journey toward a better, healthier, and stronger self is a true honor!

Dallas has been coaching Crossfit for the last 4 years, and stumbled upon Crossfit at his last place of employment. Dallas is also a CADC-CAS (Certified Alcohol and Drug Counselor- Certified Alcohol and Drug Specialist) and worked serving the substance abuse population for 7 years. During that time he started doing Crossfit and began coaching clients at an inpatient drug and alcohol rehab where they had an affiliate Crossfit gym.

Dallas has been sober from drugs and alcohol for 8 years and believes that Crossfit and fitness can truly transform someones life. Crossfit helped save his life and reignited his purpose and passion for health and fitness. Crossfit is a great arena to challenge the mind and build grit by overcoming difficult tasks. Crossfit can train the mind and the body in the same workout which leaves members with more sound physical and mental health.

Born and raised in Santa Cruz, Ellie grew up outdoors and very active. As a teen she played soccer, rode mountain bikes, ran track and was a Varsity cheerleader. As an adult she was a competitive runner, avid rock climber and frequent gym goer. She found her way to CrossFit through a friend in 2013 and immediately fell in love with the workouts and the community.

She is a certified CrossFit L1 trainer and also has a certificate in CrossFit Nutrition. She says that coaching is an aspect of her life that brings her a great amount of energy and joy. “I focus on meeting people where they are at on any given day and celebrating their individual goals and successes. I always want to I encourage everyone to be positive and feel empowered by how strong and capable they are physically and mentally.”

Her hobbies and passions include working out with and spending time with friends, trail running with her two Jack Russell terriers, cooking, baking and living life to the fullest with her husband and three active kids.

Calvin discovered Crossfit his junior year of high school. He was playing varsity soccer at the time, and his parents started going to this new gym. He tagged along with his dad on a morning that he didn’t have practice and was hooked. After that, he took every chance he could to go to the gym with them, but it wasn’t until he moved to Santa Cruz and joined Crossfit Aptos that he got to fully embrace it. Growing up he played every sport imaginable – soccer and basketball were my favorites, but he also played baseball, hockey, swimming, and rugby, and he was a three-sport varsity athlete in high school. All that said, non of those sports challenged him on a daily basis as Crossfit does.

Calvin’s background in athletics fostered a love for health and fitness, which lead him to pursue a bachelor’s degree in Kinesiology with a concentration in Exercise Science. While in school, he also got his Level 1 certification and began to coach. Calvin’s favorite part about coaching is watching people surprise themselves with their own capabilities: their first handstand, pull-up, or double under, and the look on their face when they realize they have just done something they never thought was possible.

Tim has called Santa Cruz his home ever since he was a young man, fresh outta high school. He has a lifelong passion for sports, fitness and competition, but has to admit that the Dad-Bod had taken over after many years where other priorities had pushed fitness down the list somewhere below his Friday night slow-pitch softball league. That was until Tim walked into his first Crossfit workout in 2013. He went in thinking of how the workout was incorporating familiar routines and regimes he had used previously, and when he finished he thought of how challenging, yet rewarding it had been. Oh and that everyone should be doing this.. That’s when the trainer said that the warm-up was over and it was time to start the real workout. Tim fully believes that his fitness journey has saved his life and is excited that he can use his passion to help others achieve their own fitness aspirations.

Tim earned his CrossFit Level 1 (CF-L1) trainer certificate in 2018, is a black belt instructor in Shotokan, Tang Soo Do and Taekwondo Karate and has competed in international karate competitions. Always the weekend warrior, Tim runs Spartan races, sprint triathlons and has competed in multiple CrossFit competitions include a 1st place finish at the 2018 NorCal Masters and 2019 Masters Clash, and a 2nd place finish at the 2019 Northern California Classic. The Youmans CrossFit clan includes his wife of almost 30 years, Kelley and his two adult ‘utes’ Shannon and Christopher.